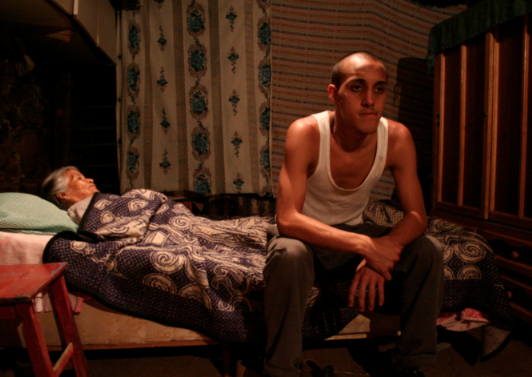 Where Are Their Stories?

As I write this I’m listening to a new double-CD from San Francisco bootleg label Mad Deadly Worldwide Communist Gangster Computer God titled Polanski, Anger, Cocteau, T.V. Mikels, an entertaining collage of radio interviews that spotlights the filmmaker as implacable solo artist. Interestingly, it’s exploitation director Ted V. Mikels who emerges as the most surprising participant, outside of his rather incongruous inclusion alongside those other hallowed names. Far from the tyrannical, barrel-chested sleaze artist one might expect, Mikels comes across as pleasantly easygoing, cooperative with and even submissive to his doll-squad casts. Mexican-born, Toronto resident Nicolás Pereda moves within art film circles rather than the B-movie universe, but one detects a similar sense of community and collaboration in his films, allowing his stock company of actors—especially Gabino Rodríguez and Teresa Sánchez, who appear in almost all of his films to date—and the world they occupy a space to breathe.

In his use of a recurring ensemble of players, Pereda may be likened to fellow long-take auteur Tsai Ming-liang. However, even as Rodríguez and Sánchez repeatedly enact a Tsai-like mother-son relationship (under their own names no less), they are markedly different from film to film in a manner that Lee Kang-sheng, Lu Yi-ching, the late Miao Tien and other regular members of the Tsai “family” are not. In Where Are Their Stories? (2007), Sánchez’s long-haired maid is mute and passive, terminally depressed, while in Perpetuum Mobile (2009), her character’s social position is more comfortable and she plays an alternately self-satisfied and ornery role with surprisingly assured gusto. Rodríguez’s roles similarly shift: in Where Are Their Stories?, with a jutting jaw that rivals the young Boris Karloff, he’s a sullen rural boy in the city; in Juntos (2009), he’s an urban layabout rooming with his sullen girlfriend and best friend in a malfunctioning apartment that, in a minor-key way, brings to mind the leaky waterworks of Tsai’s films.

It’s one of the enigmatic possibilities at the core of Pereda’s cinema that all these various Teresas and Gabinos are the same mother and son captured at different moments in time, or perhaps in subtly shifting realities. Summer of Goliath (2010), Pereda’s most narratively complex film to date, epitomizes his intriguing balance between stability and flux: a shift into fable and an untamed setting that suggests he’s been as attentive to Apichatpong as to Tsai, while remaining quietly dedicated to his own vision and sense of place—or more precisely, his ever-growing cinematic sense of home.