Michael Sicinski/50 Best FIlmmakers Under 50, CS50, From The Magazine 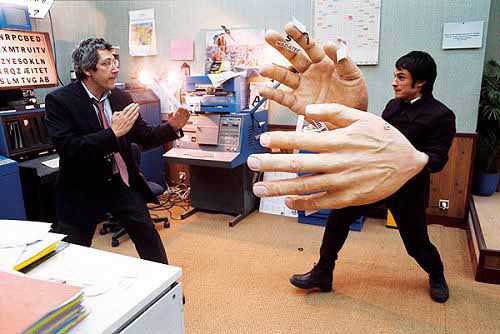 The Science of Sleep

Whereas almost all other music-video directors function in much the same capacity as graphic designers, Michel Gondry, by dint of an unyielding artisanal approach, has made a place for himself analogous to that of an architect. Like Frank Gehry or Peter Eisenman, Gondry is called upon, in essence, to do what he does in relation to an assignment, not in fulfillment of it.

Most video directors “graduate” to feature filmmaking. It’s doubtful at this point that even Spike Jonze would be defined by his work in music video. (Even his Fatboy Slim classic “Weapon of Choice” can’t stack up against Being John Malkovich [1999] or Adaptation [2002].) But any consideration of Gondry’s art must place equal emphasis on his most successful feature films and the rock clips. Eternal Sunshine of the Spotless Mind (2004) visualized the scenario of mental plastic surgery through a quick-change erasure of mise en scène. This is an expansion of techniques already at work in “Human Behaviour” (Björk, 1993), “A Change Would Do You Good,” (Sheryl Crow, 1997), and especially “Fire on Babylon” (1994), a seldom-seen clip for Sinéad O’Connor. Gondry’s use of folding wood and paper constructs and patently artificial sets in the O’Connor video to symbolically reflect the Janus-faced nature of incest—normal parental relations turn wicked when no one is looking—demonstrates the pliable nature of his artistry. By extension, The Science of Sleep (2006), considered by some to be the ne plus ultra of Gondry’s “twee,” “cutesy” self-regard, is in fact every bit as irksome as its maker intends it to be. Whether or not it contains semi-autobiographical aspects, it’s undoubtedly self-indicting. Its protagonist Stéphane (Gael García Bernal) is a man stranded in adolescent whimsy, living his life as if performing for a TV show inside his own head. The film speaks to a fussiness and a self-pleasure that in some ways refuses simple connection.

Part of the wonder of his productions—the visual reverb of “Let Forever Be” (Chemical Brothers, 1999) or the landscape structuralism of “The Hardest Button to Button” (The White Stripes, 2003)—is their handcrafted, homemade quality. Gondry is analog. But as popular art, they also have the power to irritate, because they are wasteful and excessive, profligate in their needless expenditure of time and corporate money. “You could do that with a computer.” But would a computer remind you of your third-grade recital?