Andrea Picard/50 Best FIlmmakers Under 50, CS50, From The Magazine 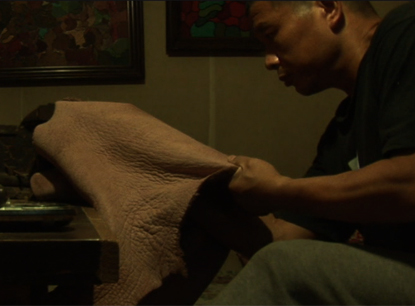 In praise of pockets—perhaps this is the essence of Liu Jiayin’s cinema to date. Like the handbags and dumplings whose real-time creation in her quietly astonishing diptych (soon to be a trilogy) of Oxhide (2005) and Oxhide II (2009) provide the films with their structuring principles, Liu’s wit, originality, and ingenious deployment of time and space masterfully demonstrate how the handmade and artisanal can exemplify a rare beauty of form. Created using a cheap digital camera for which Liu handcrafted a widescreen frame, Oxhide is a fragmentary family frieze told in 23 static, unorthodoxly cropped shots (one for each year of Liu’s life), in which the precocious filmmaker, her parents, and the family cat enact lightly fictionalized versions of themselves in a tightly delimited domestic space, centred around the table on which Liu’s Keatonesque father makes the handbags that are the lifeblood of the family’s failing business. Constructed around a series of still-life compositions (paper patterns, a sewing machine, a metal work lamp, smooth pieces of oxhide) and a cunning foregrounding of the performative gestures of everyday life, Oxhide plays out the Lius’ muted family drama via seemingly banal conversation, pregnant silences, and an inventive use of off-screen space—a subtle, powerful accumulation of minutiae transpiring before the background of a contemporary China in flux.

Who was this filmmaker who so maturely delineated the space of her imagination, carving a humanist monument from next to nothing? Even without the surprise factor that helped make Oxhide a festival cause célèbre, the more technically accomplished Oxhide II proves that Liu’s arte povera aesthetic is capable of a seemingly infinite number of variations. Featuring the same ensemble of characters in the same cramped apartment, now dealing with the stresses and encroachment of the Beijing Olympics and the imminent demise of their shop, Oxhide II ascribes to a conceptual pattern based on space rather than time. As that same work table is cleared of equipment and transformed into the arena for a family dumpling-making competition (the dramatic dough-snapping contributing significantly to the film’s strictly diegetic soundtrack), Oxhide II consists of nine shots cut on 45-degree angles that work their way clockwise around the table as Liu and her parents chop chives, knead, form, and fill their pockets of dough. As the family’s endearing domestic dynamics take shape during this real-time slow food demonstration, the richness of Liu’s recipe comes to light. While her dumplings may be a bit misshaped, Liu’s films evince a carefully calibrated yet warmly sensual sound and image construction, a droll humanism, and, ultimately, a feisty hopefulness that mark them as extraordinarily valuable in a world that purports to be incapable of taking its time.