Chuck Stephens/CS71, From The Magazine 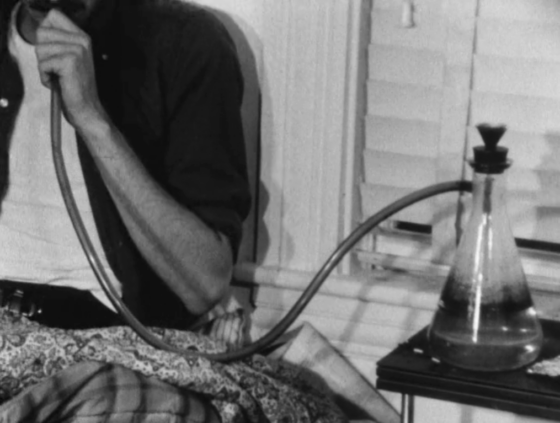 “An avant-garde film defined by its development towards increased materialism and materialist function does not represent, or document, anything. The film produces certain relations between segments, between what the camera is aimed at and the way that ‘image’ is presented. The dialectic of the film is established in that space of tension between materialist flatness, grain, light, movement, and the supposed reality that is represented. Consequently a continual attempt to destroy the illusion is necessary.”—Theory and Definition of Structural/Materialist Film, Peter Gidal, 1989

What follows—purposefully, impatiently, and entirely against the grain of the historically entrenched Structural/Materialist film-theoretical enterprise—is an adjectively enhanced and thoroughly bourgeois taxonomy of the undestroyed materiality remaining in Peter Gidal’s Room (Double Take) (1967), adumbrated accordingly. The imbrication of “articulation” that surrounds this specifically England-oriented film movement of the late ’70s/early ’80s, of which the American-born and Swiss-educated Gidal is a founding member and leading exponent, has been avoided as much as humanly possible. For this, my apologies to the filmmaker, and to the assembled theorists associated with Gidal’s major books on the subject, Structural Film Anthology (British Film Institute, 1976) and Materialist Film (Routledge, 1989).

A film in milky black and white seems to begin; no titles, just leader. On the soundtrack, bloops, rising tones—the elemental electronic enforcement of which might be a semblance of “narrative” urgency—sound over this blank leader, then continue over Academy leader, then more scuffed-up blank slug, and continue rising as imagery begins to appear. A mink stole hangs on an apparently white wall, filmed by a descending camera. (This image has been punctured by the film processor’s identifying perforations, an indulgence in one of the most familiar tropes of the “experimental” film: the materiality of the filmstuff itself.) The camera caresses the mink as it descends, finally reaching a rough sketch of a seated woman attached to the wall below. The camera pulls back momentarily to consider this bluntly rendered form, then continues to descend along the edge of a doorframe and downward across a pile of items in disarray on the floor, a copy of the Mothers of Invention’s Freak Out! centre-pile.

Zoom in to a close-up of the label of a Columbia Records recording of Beethoven’s Sonata No. 32 in C Minor, spinning. Pan along the edges of additional furniture, various small items on a tabletop, and up a bookshelf: Huxley, Beowulf, Freud, Tropic of Cancer, Mailer, Pinter, Catch-22, some mainstream science fiction. A copy of Kulchur Press’ paperback edition of Gerard Malanga and Andy Warhol’s Screen Tests comes conspicuously into focus. (Gidal would later publish several of his own books on Warhol.) Artwork and assembled objets above a mantle, those electronic bloops on the soundtrack ever-ascending in pitch. A particularly messy splice, then the camera zooms unsteadily towards a doorknob, urging the camera operator to find the focus dial. Once in focus, this doorknob is briefly pondered, its cosmically scarred surface lent fleeting significance, then abandoned as the camera zooms up, out, and away. More perforations. A flood lamp on a stand, pointed at nothing in particular; above the nothingness, a silkscreen of Edie Sedgwick. More restless zooming. A pillow, a radiator, a desultory window frame, an acoustic guitar. A fashion model on a poster, an antique dresser. Blooping, BLOOPING. Another window casement, a trash can, an end table serving as a nightstand, a filthy water pipe on top. The camera pans along a rubber tube from the pipe to a stoner—begrizzled, hippie-tousled hair, black plastic glasses—enacting a couple of inhalations. There has been some print damage mid-pan, a few violently torn and repaired frames, and suddenly the bloops, having gotten as high as they could, desist.

The stoner—twentyish, the age to dodge drafts—lets his head loll back against the wall. There is little to no smoke apparent in his exhalations; it appears an altogether amateurish performance of inebriation. Finally, with no increasing conviction, the stoner takes another hit and the film ends. In the event you’ve missed anything, the film then begins again, from the beginning, and runs again, all the way through. Double take, double toke: still no smoke. Destroy your illusions.

Posted in CS71, From The Magazine