Exploded View | Death of the Gorilla 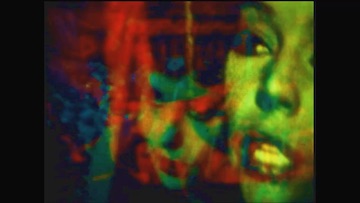 “By cutting across so many jungles, the archetype of adventure came out crazed and beating his chest. I barely understand him.”

Legendary Los Angeles filmmaker Peter Mays is talking about his gorilla. His gorilla is dead, and has been a number of times now—dead on its various arrivals. Originally signed and “finished” in 1966, Death of the Gorilla—one of the greatest (and still least-known) of ’60s lysergic masterpieces—is a film that has, according to its maker, been several times born and undone and resurrected and deconstructed and, most recently, lustrously restored by master preservationist Mark Toscano, whose account of the travails involved is well worth Googling. A pulverizing plummet into the heaving heart of Hollywood’s Golden Age ur-magination, Death of the Gorilla consists entirely of footage from island fantasias and giant-ape spectaculars, Italian outer-space operas and Maria Montez boudoir exotica, all of it re-photographed and re-re-photographed in short bursts and at close range off of a black-and-white television set, through various lushly coloured gels. Edited into an ever-shifting dreamorama, the result is a retina-saturating, perpetually churning palimpsest of fevers, desires, disasters, dancing girls, and space monsters: Rose Hobart (1936) as re-imagined through mescaline and Mario Bava. It rightly belongs alongside the collective early works of George and Mike Kuchar, and directly in the wake of Bruce Conner’s A Movie (1958), as a ferocious encounter with and fabulous inversion of the History of the Movies in the Era of Sarris’ The American Cinema—all of it seen, rather darkly and at a great distance, through the blur of the backwards boob.

Mays went to UCLA at the beginning of the ’60s, a campus contemporary with Pat O’Neill. He built his own printing and processing gear and began working on experimental films at home while finishing a degree in painting. After graduation he taught drawing while running a campus film society, mainly to indulge his own burgeoning sense of Film Culture-nurtured old-school auteurism and his avidity for the titans of the still-emerging New American Cinema. (Rumour has it he also pocketed the proceeds from the screenings to finance his own films.) Mays was also a founding member of the psychedelic light show entourage Single Wing Turquoise Bird in 1968, and between 1967 and 1974 worked sporadically on a counterculture 16mm feature entitled Sister Midnight. His filmography is extensive, extraordinary, and elaborately detailed and accessible at www.hallucinograms.com.

Mays is also his own best critic and chronicler, as his biographical rumination “Mouse Enigma: Auto-History Of A Film Person” (1978-79, reprinted in Alternative Projections: Experimental Film in Los Angeles, 1945-1980, edited by David E. James and Adam Hyman) amply attests. Describing Death of a Gorilla, Mays writes:

“Horse pentagram woman and falling boulder frightens and disperses Kong audience, exploding three people up four thousand mile volcanic tube from Atlantis into magic rings on mirror table, and Yvette Mimieux kissing a statue’s toe as space men burst thru flowers. Cut to red Mars flying saucers cutting up DC…Cut with no sense of direction, but moving thru modern man’s mind like a train bursting at the seems, to an Apocalyptic destruction of earth by meteorites from above and volcanoes from below, leaving you in a long Astral void war followed by a cold moon landing death. Last dim glimpse of purple veiled Marlene ambiguously fingering and examining tones on a necklace as if the sequence of the film.”

“Bursting at the seems,” indeed. Did I mention that Sabu is in it? Tarzan, too. The film changes the channels for you, like a year’s worth of TV Guide in the shape of an LSD barrel. Is the version of Death of a Gorilla that you are headed over to watch on Vimeo right now definitive? Depends on how you define definitive. Is it the most amazing film you haven’t seen yet? Probably. Is the gorilla dead? Most definitely. Long live the Gorilla!

Posted in CS65, Exploded View, From The Magazine