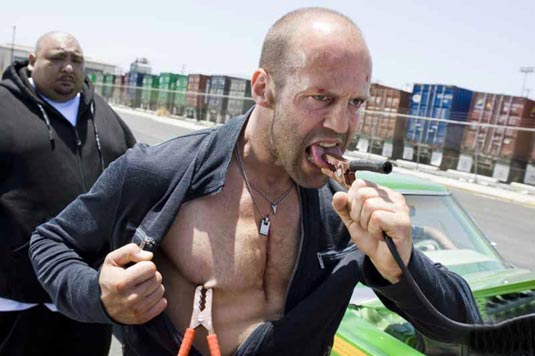 Two men on fire: the burnt cranium of the title character in Mark Neveldine and Brian Taylor’s new Ghost Rider: Spirit of Vengeance unmistakably evokes the climax of their earlier Crank: High Voltage (2009). The spectacle of a brainpan in flames is an apt avatar for a directing duo whose M.O. is sensory overload. But not all smoking skulls are created equal. The singed visage of Crank’s antihero/punching bag Chev Chelios (Jason Statham), glowering wryly from behind a raised middle finger to the ecstatically cheesy sounds of REO Speedwagon’s “Keep On Loving You,” was an image of confrontation and communion, an olive branch wrapped in barbed wire. It was a message to their hard-wired fans: this smirking death’s head is the face that you deserve.

There’s no comparable, complicated “fuck you” moment in Ghost Rider: Spirit of Vengeance, a film that is neither to be loved nor hated, and certainly not both at once. Working for the first time under the auspices of a major studio, from a commissioned screenplay, and for the first time not serving as their own camera operators, Neveldine/Taylor—who eschew Christian names in their creative partnership—have delivered a predictably compromised piece of work. Opening in “Eastern Europe”—a dateline far less amusing and pointed than Gamer’s (2009) “Some years from this exact moment” title crawl—Ghost Rider: Spirit of Vengeance unfolds as a series of chase sequences punctuated by the most perfunctory examples of plot and character development, as Nicolas Cage’s Johnny Blaze tries to purge the curse that gives him his powers. What’s really at stake here is not the fate of humanity, but rather Neveldine/Taylor’s status as the lone true post-Verhoevians: tacky masters of the juvenile and the Juvenalian.

Where Verhoeven, however, had the advantage of approaching the heavy-metal epics of his Hollywood period as an outsider—a pervy Euro barely able to keep his tongue in his cheek—Neveldine/Taylor are pure products of the American entertainment-industrial complex, which makes their satirical sharpness and Rabelaisian extremity all the more startling. As with Verhoeven, their films are filled with gags in both senses of the word, and the truly repulsive stuff is often the most hilarious—and the most double-edged. Pandering to, and exulting in, the presumably debased tastes of an oversaturated, overstimulated mass audience, Neveldine/Taylor take those tastes to that Verhoevian vanishing point where mindless sensation and ferocious satire become indistinguishable; they’re simultaneously turned on and repelled, a duality that serves to heighten and deepen both responses.

“I must be the most fucking genius of sick,” crows Ricky Verona (Jose Pablo Cantillo) in the first scene of Crank (2006), a boast that doubles as a statement of artistic intent for the film’s creators. Ricky’s plan to inject his underworld rival Chev Chelios with a lethal chemical cocktail (“the Chinese shit”) owes an obvious debt to Rudolph Maté’s D.O.A. (1950), in which Edmond O’Brien’s hapless insurance agent discovers that an unknown bad guy has slipped him a “luminous toxin” for which there is no antidote. In Crank, by contrast, the culprit gleefully confesses his guilt via a DVD message recorded for the victim, which makes the film’s central mystery not whodunnit, but how Chev is going to stay ambulatory long enough to avenge his impending death. The solution, arrived at fairly early on, is to spike his adrenaline level at regular intervals with whatever means are at hand, whether it be sex, violence, or drugs, legal or less so (“Epinephrine, man,” purrs Dwight Yoakam’s seedy physician, prescribing a potent dose of artificial adrenaline that becomes Chelios’ mid-film mantra).

This self-reflexive conceit is the narratalogical equivalent of popping open the hood of the action movie to reveal the pistons pumping underneath. Chev’s only hope for salvation is stimulation, and the life-or-death stakes—if he dies, the movie is over—gives the character carte blanche for carnage and the filmmakers the opportunity to create a breathtakingly blank ethical space, a kinetic video-game void where action completely defines character. When a cab driver asks a hell-bent Chev which way he wants to go, the passenger bellows “Go right!”—a sly joke on side-scrolling directionality that rhymes with the 8-bit graphics that bookend the film. It confirms beyond a shadow of a doubt that Crank is D.O.A. by way of GTA.

Neveldine/Taylor’s visual scheme is the luminous toxin in that mixed drink, favouring harsh, bleached-out colours, and nauseous camera movements achieved with lightweight, handheld cameras. The plot’s momentum demands montage, but Crank is first and foremost a film of masterful frames, from close-up compositions that seem to burst at the seams to witty exercises in middle-distance spatial gamesmanship. (There’s also a subtitle joke so subtle it made David Bordwell flip.) Unrepentant formalists, they stylize their actors into props, with Statham’s bullet-headed, barrel-chested body as their most hilariously malleable resource: Chev flies in and out of view, slams up against the camera lens, and looks about ready to burst out of his skin during rare and involuntary moments of stasis. By undermining their star’s stolid solidity and turning him into a walking (and running/jumping/standing still) visual joke, Neveldine/Taylor get the first effective performance of Statham’s career, and they surround him with performers who bounce smartly off his hybrid irresistible force/immovable object act. Top honours go to Amy Smart as Chev’s slow-poke, pot-bunny girlfriend Eve, whose unshakable languor and analogue apathy (“Get a cellphone, honey, please,” begs Chelios to her old-fashioned answering machine) is a ceaselessly hilarious foil to Chelios’ helpless hyperactivity.

Nevertheless, Crank’s gleeful amorality doesn’t excuse the centrepiece scene where Chev, desperate for a jump-start, semi-forces Eve to have sex with him in the middle of Chinatown. But the way that Neveldine/Taylor modulate the bit from uncomfortable semi-realism to equally uncomfortable full-frontal farce—heedless, mutually satisfying rutting in front of scores of cheering strangers—is instructive. Their only interests are acceleration and exaggeration, and in the same way that Crank’s adrenaline-junkie conceit lays bare genre-movie mechanisms, the sheer outrageousness of the events onscreen means to liberate all parties from any remaining illusions of decorum and decency. Since every killer-with-a-heart-of-gold thriller has to include some sort of revivifying sex scene, why not make it perverse instead of perfunctory? It’s possible to read into Crank’s depiction of a harried modern mug sustained by violence and pharmaceuticals, but there’s no need to dig below the surface when form and content so wholly coagulate. The medium is the message, and the message is, basically, “OMG.” Or, maybe, “WTF?!”

This evocation of degraded chat-room vernacular is even more pronounced in Gamer, a great, nervy contemporary satire masquerading as DVDP-calibre dreck whose disguise was so convincing that even the critics who were sympathetic to Crank’s postmodern blur failed to recognize its urgent/indulgent cultural critique. (The exception: Steven Shaviro, whose epic, 10,000-word blog post/essay is the major rallying point for the film’s defenders and a far more cogent summation of its contents than I can offer here.) Set somewhere in the 21st century A.D.D., in a thriftily but persuasively realized global metropolis where skyscrapers have been appropriated as digital billboards and video games have become a vertically integrated source of entertainment, employment, and economy, the film rehearses a familiar dystopian scenario: death-row convicts become gladiators trying to win their release. In lieu of execution, the prisoners can choose to be controlled (via nanotech implants) by superstar joystick-jockeys as players in a live-ammunition first-person-shooting game called Slayer, which is broadcast to a jacked-in viewing audience of tens of millions.

There isn’t much interest in whether nominal hero Kable (Gerard Butler), another soulful sociopath in the Chelios mold, is going to defeat the smarmy, Bill Gates-ish internet impresario Castle (a wonderful Michael C. Hall), who’s trying to rig the game against him. What’s stunning in Gamer is Neveldine/Taylor’s commitment to creating the most hideously anodyne virtual space in cinematic history. Slayer’s equally popular sister second-life program, Society, allows gamers to control ordinary civilians in a sick parody of social interaction. The candy-coloured crowd scenes are riots of goggle-eyed, roller-skating extras in mismatched outfits, mindlessly acting out garishly caricatured clubland rituals. One unforgettable interlude: a corpulent, immobile virtual-reality controller manoeuvring his distaff avatar into a rape-fantasy scenario, a repugnant mirror image of WALL-E’s cutely infantilized consumerists. Another: a teenaged video-game whiz splayed out in a bedroom that’s also a 3D, 360-degree echo chamber of aggressively illiterate online talk, a torrent of unmitigated hostility and stupidity that’s at once indistinguishable from the surrounding tone of the rest of the film and acutely indicative of some queasy, free-floating unease.

The most jokily baroque touches in Gamer, like pumped-up bad guy Terry Crews’ falsetto rendition of “I Got No Strings” during a confrontation with Kable, aren’t necessarily its master strokes; hyperbole heaped on top of hyperbole has its limits. An even more glaring case in point would be Crank: High Voltage, which literally begins where its predecessor ends (another great title card: “Seventeen seconds later”) but also does so figuratively. It’s not that the remodelled plotting (Chev now needs electrical power-ups to keep his ticker ticking), escalating scatological jokes (a sawed-off shotgun suppository) or ghoulish new characters (Bai Ling’s nigh-indescribable, pidgin-English-spouting train wreck) are offensive in and of themselves—or at least, not merely so. What rankles about this fitfully magnificent and finally redundant sequel is the sense that Neveldine/Taylor are labouring to follow their own example. Nothing in High Voltage’s litany of talk-show and local-news coverage parodies is as eloquent as the brief, creepy shot of a reporter staring blankly into the camera in a moment of dead air near the end of Crank. (They’re also less effective than the Fox News-as-idiot-Greek-chorus tactics of Tony Scott’s contemporaneous Unstoppable [2010]).

And yet High Voltage is hardly a negligible piece of work. It has its moments (the Godzilla-fight set-piece is a great lo-fi Beastie Boys shout-out), and its myriad overcompensations are much preferable to the meek concessions of Ghost Rider: Spirit of Vengeance, with its suffocating PG-13 strictures and lazily “wacky” Nic Cage star turn. The odd film out on the Neveldine/Taylor resume is also perhaps the key towards understanding the shaky ground they occupy right now, and the one film they didn’t make: Jonah Hex (2010), another comic-book adaptation that was hastily rewritten after the duo’s original treatment scared off studio executives. Dutifully directed by Jimmy Hayward in his best faux-Rodriguez style, it’s a mostly terrible movie (excepting the presences of Michaels Fassbender and Shannon), an outcome which gives its original creators a heroic bearing: the naughty prodigies whom the suits prevented from making the most graphic graphic-novel movie of all time.

Ghost Rider: Spirit of Vengeance bears no signs of trauma, no obviously truncated passages or holes where the good stuff has been scooped out. The few feints at balls-out weirdness, like head-on shots of Johnny Blaze’s facial features phasing in and out of a supernatural state or a regrettable, Abyss-esque assembly of news footage representing demonic forces at work (or something), register as just so much fan service. Except that the true fans who recognized the poetry and potency of that monumental single-finger salute at the end of High Voltage may feel insulted in a less polyvalent way by their heroes’ act of Hollywood hi-infidelity. But if REO Speedwagon has taught us anything, it’s that the spirit of forgiveness is stronger than the spirit of vengeance. “I’m gonna keep on loving you,” insists the reedy voice on the soundtrack, maybe foolishly. Sounds about right.