Adam Nayman/Columns, CS70, From The Magazine 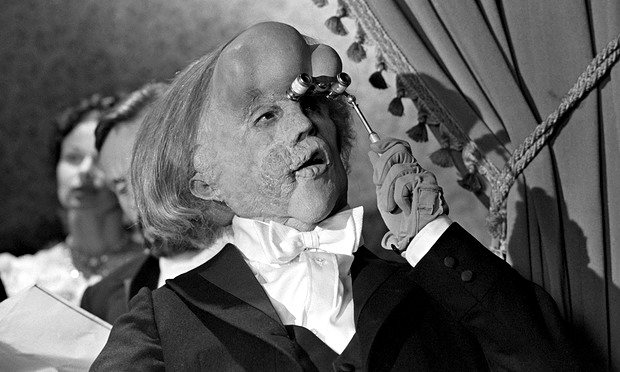 It’s all in the wrist. Buried beneath layers of latex as John Merrick in David Lynch’s The Elephant Man (1980), the only part of John Hurt that is visibly untouched by disfiguring makeup is his left arm, which the actor wields with the precision and grace of a sabre. It’s both an historical fact and an artistic necessity that this version of Merrick should be supremely uncomfortable in his own bulbous skin, and Hurt makes the ingenious choice to style his arm as an extension of his character’s humane intelligence—as if this slender, shapely limb, with its expressively flitting fingers, was trying to escape the rest of his body. The impression at all times is of a man reaching out, whether to ward off a horde of gawking onlookers at a train station or towards an audience that isn’t permitted a sense of distance. Even when Merrick is just a figure silhouetted behind a scrim in a hospital auditorium, Hurt has us in the palm of his hand.

Few actors have ever so perfectly squared the sum of their remarkable parts like Hurt, who died in January of this year at the age of 77, two years after being initially diagnosed with pancreatic cancer. (At the time of his death, he had filmed parts in several movies now entering post-production, meaning that his final role will thankfully not be that of Natalie Portman’s friendly confessor in Jackie [2016]). One of the common denominators across the various eulogies published in both the film and mainstream press was the claim that Hurt’s most striking feature was his voice, which is true enough: he delivered a series of memorable disembodied performances, including as the narrator of Lars von Trier’s Dogville (2003) and Manderlay (2005), both of which would be unimaginable without the actor’s dryly jocular presence hovering over the stripped-down melodrama. Hurt’s crisp cadence in those offered a droll, knowing corollary to von Trier’s theatre-of-cruelty sensibilities, just as they did in Sightseers (2012), where Ben Wheatley used the actor’s (uncredited) reading of William Blake’s epic poem “Jerusalem” to accompany a brutal murder occurring next to a massive stone megalith (the philosophy perhaps being that one sturdy English monument deserves another).

While other ’80s-babies might nostalgically cite Hurt’s voiceovers in Watership Down (1978) or The Black Cauldron (1978), I’d say that his greatest auditory performance was in Atom Egoyan’s fine film of Samuel Beckett’s Krapp’s Last Tape (2000), in which he plays an old man listening intently to cassette recordings he had made decades earlier. With apologies to Ian Holm, Hurt was undoubtedly the most gifted actor that Egoyan ever worked with, and even if the director’s interest in Beckett’s 1958 one-act was a callback to the surveillance textures and diaristic storytelling of Family Viewing (1987) and Calendar (1993), his willingness to self-effacingly frame his star in close-ups was a good call. The fine-grained gradations of recognition and regret crossing Hurt’s face as Krapp is drawn back into the past as if via autohypnosis display mesmerizing technique; his absolutely uncanny line readings go beyond it. Close your eyes and it truly sounds as if he’s conjuring up and communing with his younger self—the brash 26-year-old who held his own with Paul Scofield and Robert Shaw in A Man for All Seasons (1966), perhaps.

“When an actor dies, a part of him becomes strangely amplified,” wrote Egoyan toward the end of a remembrance in The Globe and Mail. Egoyan’s essay captures something of what made Hurt so uniquely suited to roles in which death and dying are foregrounded, including Krapp’s Last Tape, which, from its valedictory title on down, is styled as a meditation on mortality (“an essay in aloneness,” Hurt called it in a piece he wrote for The Guardian). Even as a younger man, Hurt radiated a certain fragility, as if his characters were living on borrowed time, or else were stricken with some dismal foreknowledge of their future. In Midnight Express (1978), his emaciated, heroin-addicted prisoner is always on the verge of collapse, barely able to stand under his own power, in marked contrast to star Brad Davis’ stouter all-American protagonist (Oliver Stone’s script actually turns Hurt’s Max into a kind of damsel-in-distress figure whom the jail-breaking hero must pledge to return and rescue). In The Hit (1984), Hurt’s fortysomething professional killer is so prematurely world-weary that he’s funny, skulking through Stephen Frears’ sun-baked neo-noir in a resplendently rumpled white suit and going out in great anti-heroic style, with an enigmatic wink directly at the camera.

Hurt was not Ridley Scott’s first choice for the doomed Kane (a name freighted with Biblical portent; he’s about to be marked for all time) in Alien (1979); the role was originally offered to the dashing Jon Finch, of Polanski’s Macbeth (1971) and Hitchcock’s Frenzy (1972), who had to drop out after a diabetic episode on set. The rest is history: Sigourney Weaver may have ended up the last woman standing, but even with the disproportionate focus on his torso, Hurt is very much the horrified, contorted human face of Scott’s sleekly gruesome thriller. As usual, Hurt stands out even in a company of distinctive performers: Kane is the lone member of the Nostromo’s crew to project anything less than absolute confidence in his abilities, and there’s something touchingly tentative, even childlike, about Hurt’s movements as he approaches the pod that contains the alien parasite (he wears a subtle mask of barely suppressed panic after he’s awoken from his trauma as well). The credibility of Hurt’s death throes goes a long way towards authenticating the analogue special effects, and if the legends about the shoot are true, the actor’s ability to stay in agonized character, while his co-stars were struggling to contain their revulsion at the combination of goopy prosthetics and actual animal organs stuffed underneath his T-shirt, may have saved the sequence.

A 2012 YouTube clip entitled “The Many Deaths of John Hurt” naturally gives Alien pride of place in its four-and-a-half-minute inventory of hangings (Sinful Davey, 1969), stabbings (I, Claudius, 1976), immolations (Spectre, 1977), shootings (Heaven’s Gate, 1980; The Hit), and peaceful expirations (via animated rabbit avatar in Watership Down). The video is a glib exercise in amateur internet montage (the soundtrack selection is Haddaway’s “What is Love?”), but beyond riffing on the actor’s ever-dependable expendability (he bites it very nicely at Uma Thurman’s freakishly oversized hands in Even Cowgirls Get the Blues [1994]), it illustrates something that Hurt had in common with so many other talented British actors of his generation. Like Michael Caine and Anthony Hopkins, Hurt liked working (and getting paid for it), and this enthusiasm didn’t always permit much in the way of a quality-control filter. It’s thus difficult to truly determine the overall shape of Hurt’s career: is it possible to divine a plausible artistic pattern for an actor who appeared in more than 100 movies?

In the ambition of realizing that likely unrealizable goal, a few scattered observations follow. It would seem that Hurt had a fondness (or a weakness) for Gothic kitsch, given his top-lining of über-hack Dominique Othenin-Girard’s After Darkness (1985)—a psycho-thriller shot by William Lubtchansky (!)—and Roger Corman’s delirious Frankenstein Unbound (1990), where he played a time-travelling scientist who sends himself careening into the middle of Mary Shelley’s modern Prometheus myth (it’s a ridiculous scenario, and Hurt embraces the campy spirit with a career trouper’s professionalism). The flashy breakout performances of Hurt’s early English period—including his impersonation of real-life figures in 10 Rillington Place (1971), where he played the feeble-minded, posthumously pardoned murder suspect Timothy John Evans, and The Naked Civil Servant (1976), in which he embodied Quentin Crisp in grand (dame) style—led to steady work in big-budget American and UK productions, but he still entertained or sought out idiosyncratic collaborators: surely, few other actors can claim to have worked with such a range of auteurs as Jerzy Skolimowski (The Shout, 1978; Success is the Best Revenge, 1984), Sam Peckinpah (The Osterman Weekend, 1983), Raúl Ruiz (Dark at Noon, 1992), and Menahem Golan (Crime and Punishment, 2002). He was a favourite of Jim Jarmusch, who used him as a sepulchral presence in Dead Man (1995), The Limits of Control (2009), and Only Lovers Left Alive (2013), in which he lounged decadently as a seen-it-all vampire opposite Tom Hiddleston (whose precisely controlled movements and wonderfully timbred voice have positioned him as one of Hurt’s potential inheritors, perhaps after his features have hardened into something a little less liquid).

Hurt obviously enjoyed poking fun at his iconic status later in his career, starting with a cameo for his Elephant Man producer—and, lest we forget, History of the World, Part I (1980) director—Mel Brooks in Spaceballs (1987), reprising his role as Kane and getting eviscerated all over again (a bloody good sport two times over). At the same time, there was perhaps something lazy about Hurt’s late-career willingness to be cast in films that didn’t ask much more of him than to act as an adornment. It’s no surprise that genre-meisters like Guillermo del Toro and Bong Joon-ho hired him on to play sages in Hellboy (2004) and Snowpiercer (2013), or that he eventually got around to cashing a Harry Potter cheque (for 2013’s Deathly Hallows: Part 2). His stunt-casting as a Big Brother figure in V for Vendetta (2005), two decades after playing Winston Smith in Michael Radford’s version of 1984, was less clever than craven, however, and resulted in the kind of over-scaled cartoon villainy that the actor had almost always avoided in the past (or else embraced more wholeheartedly, as in I, Claudius, where his petulant, haplessly half-mad Caligula served as a grandiloquently callow foil to Derek Jacobi’s stuttering, strenuously decent Claudius).

The recent cultural resurgence of Orwell’s 1984, with print and e-book sales shooting up in the wake of the Trump Administration’s unhesitatingly Orwellian doublespeak, likely means that Radford’s film version is due for reclamation. Whatever its failings as an adaptation, it’s an ideal showcase for Hurt’s charismatic masochism: it’s no great stretch of the imagination to play Winston Smith as a recessive worker drone (Radford’s greyed-out vision of totalitarianism is nothing if not literal), but the way that Hurt conveys the character’s moral and emotional paralysis through downcast looks and attenuated pauses suggests a man locked in his body, disgusted more by his own passivity than by the forces holding him down. Even when Winston tries to resist Richard Burton’s magisterial inquisitor, it’s less with the fervour of a true dissident than the desperate tensile strength of an animal caught in a trap.

Hurt’s acting in 1984’s torture scenes evince skilfully pantomimed anguish on the level of Alien, right down to the moment of awful, ecstatic release when Winston submits and offers up his lover’s name (“Do it to Julia, not to me,” he croaks over the sound of the rat scuttling in front of his eyes). The difference is that while Kane doesn’t live to see his monstrous progeny, Winston makes it through his ordeal and gets to the end of the movie in one piece: we last see him sitting at a bar at a café, watching video of himself confessing his thought crimes. His final line under his breath is “I love you,” which Hurt gives just enough ambiguous spin that we can think it’s meant for Julia rather than Big Brother—a nifty twist on the blunt certainty of Orwell’s ending. But whether it’s a whisper of resistance or a pledge of allegiance, Hurt’s reading emphasizes its ultimate futility. Instead of a human being hidden inside a monstrous body à la John Merrick, in 1984 Hurt transforms himself into a man who has become utterly hollowed out. Only an actor supremely gifted at dying onscreen could make the prospect of living on seem so morbid. Of all the many deaths of John Hurt, Winston Smith’s spiritual demise might be the most haunting of all.

Posted in Columns, CS70, From The Magazine