Andrew Tracy/CS70, Currency, From The Magazine 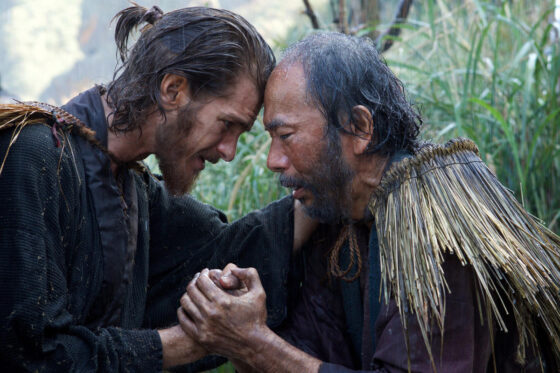 Silence is Martin Scorsese’s best film in 20 years—since Kundun (1997), in fact, which also happens to be the last of his films to focus primarily on matters spiritual. In claiming this, I have no desire to put forth a return-to-form narrative to counter that of the Scorsese acolytes, for whom the man has made nothing but masterpieces or near-to for that same span of years. If I think (and I do) that every fiction feature Scorsese has directed from Bringing Out the Dead (1999) to The Wolf of Wall Street (2013)—with the odd-boy-out that is Hugo (2011)—has been varying degrees of garish pulp, that doesn’t mean that a one-off return to the well of the Serious would, of necessity, revitalize his talents.

Rather, what Silence gives enormously satisfying evidence of is of a filmmaker thinking his way through his film: making visual and dramatic choices, developing aesthetic patterns, and weaving these into the increasingly complex substance of the drama. This, of course, is what a narrative film artist is supposed to do—but how many actually do it? To oversimplify for rhetorical effect, Scorsese’s last several films—particularly the unholy trinity of the Oscar-feted The Departed (2006), the self-conscious Grand Guignol exercise Shutter Island (2010), and the enervatingly carnivalesque Wolf of Wall Street—have worked from the same depressingly predictable stylistic playbook: long stretches of essentially static, indiscriminately cut-together dialogue scenes (so much sitting around, in the work of this supposedly most kinetic of directors!), punctuated by a big visual flourish or set piece where Scorsese takes his camera for a Steadicam jog before settling in for the talk again.

Obviously, Silence marks a decisive shift from Scorsese’s recent work in both setting and subject—the Japan of the 17th century, where the reigning Tokugawa Shogunate is brutally cracking down on both Japanese Catholics and the foreign priests who minister to them—but it, too, could have lent itself with great ease to the pattern described above. Absent the overtly pulpy pleasures of The Departed et al., Silence as well promises the recurring spectacle of violence as compensation for the acres of talk in between. What Scorsese and his co-writer Jay Cocks do here, however, is to seize upon violence-as-spectacle as an intrinsic part of the drama being played out, to double the audience in the theatre with another audience on the screen, and through this to add further shadings and colours to their prismatic central theme.

The first scene and set piece of Silence is set against a gorgeously ominous, fog-shrouded landscape, through which captive European priests are led by soldiers of the shogunate to the top of a rocky hill, where hot springs bubble and hiss. Before the eyes of the local villagers and Father Ferreira (Liam Neeson), the leader of their mission, the priests are stripped, bound to crosses, and slowly, hideously tortured to death as the soldiers use long-handled colanders to sprinkle the scalding water over their bodies. Beyond the horror of the scene, what is important here is that the Japanese officials insist that it be watched; the visual spectacle serves as material evidence that the alien faith which has been brought to their shores can be eradicated just as the bodies of its adherents can be ravaged.

For men of the spirit as well, faith often seems to turn on visual proof. After this unforgettable opening, Ferreira’s young protégés Fathers Rodrigues and Garupe (Andrew Garfield and Adam Driver), taking umbrage at the rumours that Ferreira has renounced his faith and “gone native,” resolve to make the perilous journey to find their one-time mentor. Ferried to Japan by the exiled, alcoholic boatman Kichijiro (Yosuke Kubozuka)—himself a Christian who apostasized when faced with Tokugawa torture—the priests are welcomed into a seaside village of “hidden Christians,” who conceal the Jesuits from the local authorities and beg them to perform the Catholic rites and sacraments that they cannot perform themselves. In due course, the priests and their abettors are discovered, and the latter half of this long film transpires largely within the variously confined enclosures where Rodrigues is interrogated by the local governor and resident Tokugawa inquisitor (Issey Ogata), an aged samurai whose benign countenance belies a sharp mind, a calmly unshakeable faith in his own convictions, and a ruthlessly keen sense of how to alternate reasoned argument with violent coercion.

It’s in this movement of the film that the visual truly comes to the fore, as both driving force of the drama and organizing principle of the theme. Imprisoned in an outdoor cage, Rodrigues is subjected to what are, in essence, theatrical performances: with Scorsese’s camera gazing out from between the bars of Rodrigues’ cell, captured Christians are trotted out into the central courtyard as the unwilling players in a horrifying series of atrocity exhibitions. In a later scene, Rodrigues is transported to the seaside, literally directed to his seat, and forced to watch from afar as Garupe is faced with his own last temptation: to apostasize and save the lives of his fellow captives, or refuse to violate his faith and watch them be drowned one by one.

Intriguingly, Rodrigues’ captors repeatedly insist that the act of apostasy, the desecration of the image of Christ or the Virgin, need not be one performed with any inner conviction; indeed, they fully expect that their forced apostates continue to adhere to the Christian faith, which is why the act of renunciation must needs be performed over and over. (“He’s had practice,” one of the soldiers cruelly jokes of Kichijiro, who is brought forth to demonstrate the ritual for the prisoners.) Much like the Church or any other authority, the shogunate maintains and affirms its power by material markers of that power, a repertoire of images, symbols, and ceremonies. The fact that not all those who pay homage to these symbolic practices necessarily believe in them is, to a certain extent, beside the point; ultimately, external performance can condition and change (what we believe are) our inviolate inner convictions. This is certainly the case for Rodrigues, who, when faced with the ultimate test of where his allegiance resides—the immortal realm of the spirit, or the mortal lives of his fellow human beings—still cannot help but feel that his decision extinguishes a light within himself. (Spoiler, I guess. But how can one write at all seriously about a film without them?)

The moment of Rodrigues’ apostasy is, simply put, one of the most extraordinary sequences Scorsese has ever created—a moment of such superlative filmmaking skill, emotional power, and richly complex meaning that it left at least this viewer overwhelmed. (And this viewer, it should be noted, is rarely one to be overwhelmed.) Some may find the long coda that follows this climax to be overlong, but it is utterly essential for the question the filmmakers are asking. What remains of faith once the images of faith have been abjured, asks Scorsese the supreme image-maker—what is faith without the tokens and totems that give it shape and expression in this, our material world?

If Silence has any answers to these questions, all of them are conditional. Whatever else Rodrigues may become in the decades of life that remain him in Japan, it is clear that, like Ferreira—whom he joins in a life of cultured, apostatic exile—he is to some extent a broken man. The ambiguity of this final movement is so precise and purposeful, so earned by the depth of intelligence and expert dramatic construction that precedes it, that the last shot (which I guess I won’t spoil) comes across as rather deflating. There are arguments to be had about this (I’ve had them) and other viewpoints to consider, but unfortunately no room to do so here. Suffice to say that, as part of my own conditional conclusions about this masterful film, I found the retreat to the sanctity of the image—and its concomitant, audience-reassuring guarantee of the endurance of faith—less compelling than the question of what could endure after that proof of faith goes up in smoke, and what bodiless shapes it could take.

Posted in CS70, Currency, From The Magazine