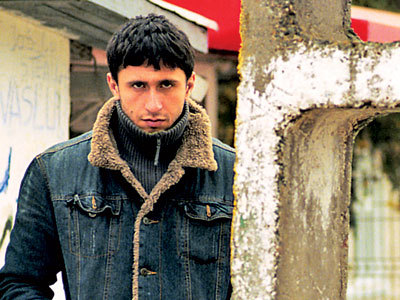 Please note that the director’s familial relation to former football referee Adrian Porumboiu has in no way influenced the consideration of this report; it may be pertinent that the notion of fairness figures prominently in their respective vocations.

It should be stated that the work under consideration has, for the purpose of this report, been conducted when possible under optimal circumstances. 12:08 East of Bucharest, the director’s 2006 feature with elderly Romanians (some drunk) disputing the revolution on a talk show, was first viewed at Telluride, where the director proclaimed, “We Romanians invented absurdity.” His second feature, Police, Adjective (2009), which “focuses on policeman Cristi who, investigating a teenage boy who has been smoking hashish, begins to question the ethical ramifications of his task,” was re-viewed on a non-theatrical DVD format, on which playback was possible after admittedly falling asleep two times during viewing.

But it is upon the content of the director’s work to date that we base our consideration, and thus it is toward the notions of history, language, morality, and absurdity—all words that have been applied, as descriptive attributes, to the director’s work, that we turn our attention. Presently there is insufficient evidence to suggest that these themes have reached full maturation in the director’s work, which often favours long passages and lugubrious dramatic action without punctuation. Police, Adjective contains an inquiry into criminal activity and its potential punishment, and is therefore moral in nature, but its nominal plot of an investigation, or procedural, is stalled by irreconcilable “qualms of conscience” and ultimately resolved by an ineffectual police force with recourse to a dictionary.

For all the insistence on language, definitions, and the political/moral implication of consensual usage, it is often in an everyday or “quotidian” context that the theme is broached. Again in Police, Adjective, Cristi engages in a futile argument with his new wife about the lyrics of a popular song; it is not clear if the inclusion of this exchange has elucidated our understanding of the power of language, or merely alienated us as viewers from the drama that, to be candid, the director has done little to usher into urgent purview. But to be fair it also worth crediting the director with the insight that unrequited love may very well be like toothpaste without a toothbrush.

Therefore, while there are reasons to suggest that Corneliu Porumboiu has engaged with his work in a technically competent manner as befits his potential induction into future cinematic canons, and he has questioned the ethical ramifications of his task, this report remains inconclusive. But go easy on him. He’s just a kid.