Raya Martin/50 Best FIlmmakers Under 50, CS50, From The Magazine 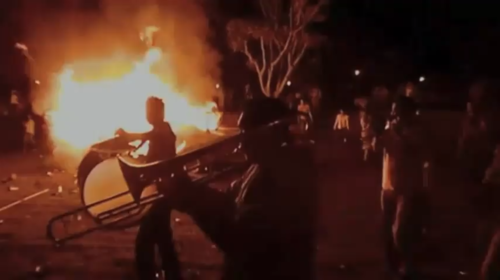 This Is My Kingdom

There is much to be said about Carlos Reygadas—the way he shoots his lifeless sex scenes as class discourse, or the way he embraces his characters as milieus, and vice versa—but his greatest weapon is not his ability to achieve technical prowess with a relatively limited budget, nor his tributes to a transcendental cinema. His real weapon is ambition. Crowded by the Mexican triumvirate of Cuarón, Iñarritu, and del Toro, Reygadas prefers to make cinema as the commodified discourse it could be. Stories are being sold, and images are being peddled, and the result is a politically hedonistic mirroring of Mexican history.

Revolución (2010), an omnibus film by ten Mexican filmmakers commemorating the bicentenary of the Mexican Revolution, presents Reygadas’ best work to date. Este es mi reino (This Is My Kingdom) takes place in a simple setting—a Mexican country fiesta—where the guests exteriorize the whole class spectrum of his country. The rich warm up to their landed history before moving on to a framed painting of a map, on which kids tack up their achievements of subjugation. The middle class curse the land they step on, concerned with their own landscape of knowing and being known. They have to dress well for the game of survival; trends are lifted up to the television gods. There is also the search for drugs, and the fascistic/fashionistic fascination with their existence, only because we are never satisfied with the reality we are dealing with at any moment. And the working class? A minefield of descriptions, from embarrassed to embarrassment. There is the continuing detachment from technology (or is that just old age?). The revolutions in their heads and hearts that only the cameraman knows and can be asked about. These distances are all covered and continuously covering—much like in Japón (2002)—because seats have been assigned, then unassigned, for the portraiture ride.

Yet Reygadas, who appears in the background of the party’s opening, is unconcerned with the camera’s presence. He doesn’t really worry about staging the whole thing, here or in any of his films. He is concerned with our own biases, and how they become manifest in celluloid or video. We are reminded that the filmmaker as an artist is really only here to do one thing: ensure that the paying audience gets to see onscreen what they encounter as soon as they leave the cinema.