Max Goldberg/50 Best FIlmmakers Under 50, CS50, From The Magazine 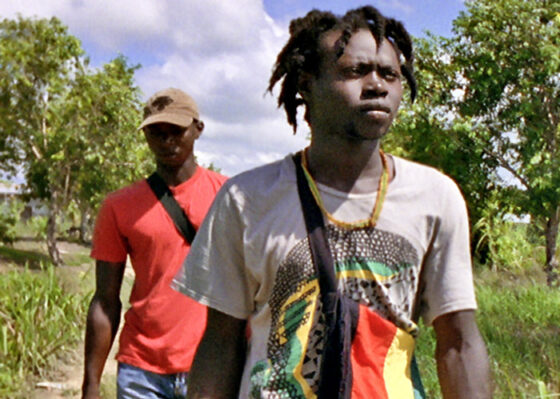 Let Each One Go Where He May

Ben Russell’s field studies of transfiguration invoke the magic of cinema with fearsome lucidity. Hollis Frampton might well have been describing Russell’s work when he defined invention as “the vivid primary instantiation of a compositional strategy deriving from a direct insight into the creative process itself.” Structuralist in their conceptual clarity and analogue poetics, the films take ontology by the teeth: Russell’s designs on embodiment require that ideas be performed and the camera taken up as a risk. A punk praxis is at work, one that shares a common root structure with the Providence band Lightning Bolt—catalyst of the incandescent Black and White Trypps #3 (2007). Certainly, there’s good reason to count Russell among those contemporary filmmakers fruitfully engaged in reimagining tropes of ethnographic distance. Where Russell is underrated, I think, is in his daring as a portraitist. Even more than his 13-shot feature Let Each One Go Where He May (2009), his serial single-roll reconnaissance flights into the deep structures of ecstasy and trance stand as a major achievement. And they’re only getting better: Trypps #7 (Badlands) (2010), concerning inner and outer manifestations of the American desert sublime, and River Rites (2011), a stunning Suriname canvas flowing in reverse, explode Cartesian dualities with newfound eloquence.

The films come spring-loaded with perceptual surprise, formalizing the liability of unmediated experience through specifically mediated effects. But we would do well to note the subtlety with which the reverse time of Chris Fawcett’s magnificent Steadicam in River Rites first registers (the film tests what does and doesn’t change when directionality is stood on its head). If choreographing the unbroken camera movement against the clock is a relatively straightforward proposition, it’s one that resonates on several different levels. There’s the paradoxical nature of time, always moving forward as what it represents draws back, finishing in the past to remember the future; the fresh angle on ethnographic knowledge and attendant reflection that temporal dynamics may be as culturally determined as spatial ones; the marvel of Brian Chippendale’s cymbal collecting itself into a fine point just as the water’s surface returns to calm as boy after boy emerges from their dives with the sudden life of a great painter’s sketches (or Maya Deren’s dance films). The film’s deepest insight is the one that’s right under your nose: that everyday gestures and rituals hold their shape no matter the arrow of time. One could imagine a social theorist expanding on this theme for several hundred pages, but Russell gets the essence in a roll of film. With such a revelatory frame for looking it’s no wonder the image looks back.