Jay Kuehner/CS71, Currency, From The Magazine 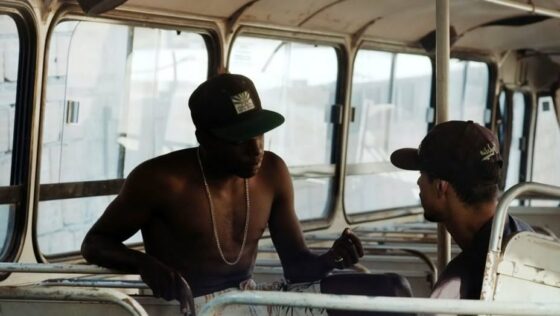 An epistolic ode to labour, love, and life on the road, Affonso Uchôa and João Dumans’ Araby opens with a seemingly innocuous sequence that belies its ambition: teenage Andre (Murilo Caliari) pedalling his bike on a mountain road in the southern Brazilian state of Minas Gerais, a Townes Van Zandt song on the soundtrack presaging wistful sentiment. The way that Andre will become both subordinate and critical to the film’s primary narrative—which uses the life story of wandering labourer Cristiano (Aristides de Sousa) to relate a whole history of the Brazilian body and soul in servitude—is indicative of the film’s expansive perspective. It’s not incidental that Andre and the other kids who populate the first reel of Araby are bored, sick, faithless, and absent parents; in the morning there’s no milk for coffee, the medication has run out, and Sunday church has become optional. “It’s easier to believe in the devil than God,” the youngest candidly remarks; “In the world there’s killings, shootings, death…and there are no miracles.” If Uchôa and Dumans stay resolutely focused on the quotidian details of marginalized lives, this early invocation of the metaphysical—coupled with the evocative, Scheherazadean aura of the film’s title—already points toward the film’s texture as fable.

The narrative conceit that unfolds Araby’s ultimately voluminous shape is an unseen accident that Cristiano suffers at the factory where he works, followed by Andre’s discovery of Cristiano’s handwritten journal recounting his decade of wanderings across the country. Resurrected by Andre’s reading, Cristiano emerges from the scrubland to become the stoic lead in his own tale, proving himself to be a reliable narrator because he has nothing else to be: “I had nothing—and nothing to fear,” he says in the diaristic voiceover that sets the film off on its new narrative direction. Though the film’s title evokes that of a story from Joyce’s Dubliners, Araby derives its literary heritage from the Portuguese-language Ulysses: João Guimarães Rosa’s unclassifiable novel Grande Sertão: Veredas (which translates roughly as The Devil to Pay in the Backlands), with which the film shares not only its tale of a backlands anti-hero roaming the beyond of Minas Gerais in search of self-realization, but also an inclination for orality, for the power of the telling of a tale to an implied, silent listener.

Any docufiction perplexity arising from the fact that Cristiano is a fictionalized iteration of non-professional actor de Souza—who previously performed another variation of himself in Uchôa’s The Hidden Tiger (2014)—is absorbed into the casually episodic nature of the narrative. Though Cristiano is archetypically situated in a long line of weary loners who’ve wandered cinema’s backroads and bywaters, his is less a voyage of becoming than an eternal return, which makes Araby a synthesis of seemingly contradictory terms: an epic of unsensational proportions. Destined for a life of itinerant labour after a stint in prison, Cristiano roams from town to town in search of menial employment, his odyssey circumscribed by whatever job is at hand. “During that time I did everything a man could do,” he says: “Packed products, made deliveries, picked tomatoes, harvested beans, and learned how to fix motorbikes…” However, what begins as a mere litany of work is transformed, through the repeated ritual of labour performed, into something of an incantation. Lyricism emerges in the brief respites of downtime: song and story are the rewards for Cristiano and his workmates, carried momentarily away from life’s hardships by melodies plucked on out-of-tune guitars. One is eventually left sharing in Cristiano’s nostalgia for “everything I’d seen in the cities I’d been to, and the people I’d met along the way”: the son of a tangerine farmer, who now works in the orchards himself, recounts how his father worked like a mule for miserable pay, and how he came home smelling of rotten fruit; a comrade who, in the cramped worker’s quarters, reads aloud a letter from his mother detailing how someone’s son was arrested and the dog escaped through an open gate. The camera traces the flow of words upon the listening crew, and back to the teller of the tale; the provenance of stories situated among those who’ve lived them.

As neither paean to heroic labour nor lament for its wretched conditions, Araby—and, by implication, Cristiano—takes succour from the consolations of sorrow (call it saudade), best embodied in Cristiano’s plaintive, weary, but never despairing voice. Cristiano’s woes become commensurate with his awakening, his tiring body gives way to the opening of his mind, drawn out in the act of remembering: “I started to enjoy thinking about what had happened to me,” he writes. The redemptive power of storytelling makes the pains of labour sufferable. Bedding down on a borrowed mattress evokes memories of sleeping in “all kinds of places…on floors, sofas, chairs, on cardboard with a blanket, on a pile of sacks…in prison we slept standing up.” On the subject of heavy lifting, objects are summoned through visceral memory: Is it cement that is the worst thing in the world to carry? Or roof tiles, timber, bricks, pumpkins, a pig that is still alive, salt, coffee, potatoes, foam mattresses, rice? An index of labour lives on in Cristiano’s body, though it is guilt that ultimately proves the heaviest burden to bear: suffice to say that a tragic accident comes to weigh heavily on his conscience, and what was once a merely peripatetic life becomes irrevocably fugitive, the liminal now a kind of exile.

Through all the vicissitudes of fate, Cristiano somehow retains a capacity for gratitude; he comes to see the circuitous path of his life as leading him to his beloved Ana, a secretary at the textile mill who materializes late in the tale. They are seen winning a toy guitar at the local fair, sleeping in each other’s arms, and meeting at the factory gate in the mornings, before eventually drifting apart. (“We were the memory of a couple,” confides Cristiano in his notebook, “the closest thing I had to a family, but it was just close, and all a little sad.”) The film culminates in a feverish finale in which Cristiano toils in the bowels of the factory furnace, his words rising now with an unprecedented power, wavering between liberation and defeat, the workingman’s death coinciding with a poet’s awakening. Amid the ceaseless din of machinery, he can at last hear the sound of his own heart, and it’s telling him to go home. “I wish I could take my workmates’ arms and tell them I’ve woken up,” he exclaims, though he feels “like a tired old horse.” His sacrifice can’t cleanse the black smoke from their lungs, nor will their blood cease to be a river of minerals. Araby intimates that maybe God has forgotten him, and us, so it’s holding a vigil for a life—enshrined in the margins of a notebook, beheld now by a stranger— made magnanimously visible in the form of a film. Contrary to all doubt, someone is still listening.

Posted in CS71, Currency, From The Magazine