Alvaro Arroba/50 Best FIlmmakers Under 50, CS50, From The Magazine 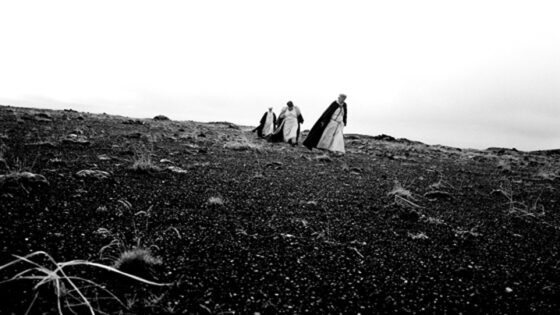 How can we recognize the signature of a post-classical filmmaker at first sight? Since the onset of modernity, it’s no longer revealed in the content, but in something diagrammatic found in a film’s outlines; the preliminary image (already emancipated from speech) is reduced to a series of strokes…and when some trace of the shot matches its reflections in our memory, then, voilà, the auteur is suddenly revealed, so full of power. With only four feature-length works (Honor of the Knights, 2006; Birdsong, 2008; Lord Worked Wonders in Me, 2011; The Names of Christ, 2011) plus a glorious, Soviet-musical-like overture (Crespiá: The Film, Not the Village, 2003), Albert Serra is already one of the greatest sketch artists of our time, alongside Malick, Sokurov, Hutton, Kaurismäki, and Costa. There have been Classicist, Gothic, and Baroque directors, but only Serra and Bresson are ethically and aesthetically Romanesque: their heroes are written as plain, schematic archetypes of the collective unconscious (with a free ticket to ride there and back). Serra’s source for this is obvious as he hails from Banyoles, a Catalonian village surrounded by wondrous Romanesque monasteries. Isn’t it tempting to see Don Quixote and the unnamed magical King—Lluís Carbó—as a synthesis of a medieval Pantocrator, almost as an icon? Witnessing these films’ shocking presentness is akin to experiencing time travel: a branch of an olive tree grasped by Carbó or a crown wore by Lluís Serrat invades our consciousness with myth and history intertwined.

Following Lorca, Dalí, Plá, and Pepín Bello, for Serra art begins from his inner character—the rest is a mere extension. Such a neo-Romanesque artist needs to be deeply rooted in European history, law, literature, and philosophy, from Thales of Miletus to the poet Pere Gimferrer. (Sports too! His chronicle in La Vanguardia on the Kramnik-Anand 2009 World Chess Championship final is a masterpiece.) Hence, his small oeuvre is a very rooted one. Try asking Serra about his own background and typically he will proclaim, with partisan grandeur: “I’m the most ultra-nationalist of my fellow citizens: I’m radically Catalan, deeply Spanish, and a soldier of the Old Europe.” So we are faced with one of the heaviest ideological corpuses of any artist working today. In every new opus Serra builds fantastic, arabesque paths with a blend of natural grace and melancholy. He seems to stroll to some place in the infinite where fanaticism and a very special, esoteric kind of rationalism merge. But is this place the utopian Golden Age? Serra’s saturnine melancholy flows from the uncertainty about its existence and its conquest.