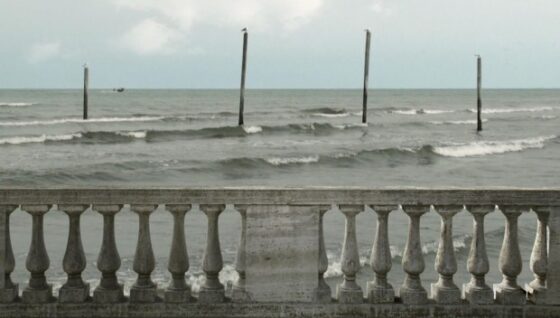 The first segment of Abbas Kiarostami’s final, posthumously completed video piece, 24 Frames, is a simple rendering of Pieter Bruegel the Elder’s 1565 painting The Hunters in the Snow. Staring, for a Cageian four-and-a-half minutes, at the familiar wintery scene—its composition exemplary of the Dutch master’s decentred, multitiered narrative designs—we witness Kiarostami’s methodical application of various animated motion effects: snow begins to fall, crows swoop across the frame, smoke billows from a chimney, and a dog pisses on a tree. It’s cute and clever, effortlessly watchable, more than a bit kitschy, and somewhat calming (even as it evokes Lars von Trier’s not dissimilar, yet exceptionally more ominous appropriation of the same painting in Melancholia [2011]). This is the only one of the film’s two dozen “frames” to not be based on an original Kiarostami photograph (though he reportedly made several other scenes from paintings that didn’t make the cut, including Jean-François Millet’s The Gleaners), and thus its inclusion feels instructive. Bruegel, like Kiarostami, gave landscape and nature their due in an art form that generally gave primacy to the human body and face, presenting a familiar world in images that expressed a democratic reverence for all things and beings.

The following 23 compositions, which each “resurrect” a single photographic instant by compositing green-screened video material into its vista, can be perhaps more closely aligned with the Lumière brothers’ sensibility, to which Kiarostami frequently pledged allegiance and paid homage in his late digital work. Like Godard, who once declared Griffith and Kiarostami the bookends of cinema history, I suspect Kiarostami thought of the Lumières as continuing Impressionist ideals; as Léaud argued in La chinoise, their nonfiction actuality pictures weren’t so much documentaries as they were paintings, using stillness to tend to the passage of time and the perception of motion, bringing methods seen in Charobim, Manet, and Renoir to their logical conclusion. 24 Frames then, more so than the similar Five Dedicated to Ozu (2003), feels like Kiarostami offering a cheeky response to Godard’s suggestion: it rejuvenates cinema’s ties to Impressionism by allowing the virtual to have its way with reality. And so alongside its casual celebration of real-time duration, the art of looking, and subjective experience, 24 Frames’ conflation of fantasy with the mundane marks it as both a return and a radical challenge to the principles and philosophies of the Lumières’ project; it’s Romantic and Modernist, privileging the empirical world in its fully “real” and immanent self while rendering it into something wholly artificial and medium-specific.

Not to colour 24 Frames as too much of an intellectual exercise—it doesn’t need ideas to function—but Kiarostami is confronting our expectations of the medium’s materiality and form here, and he does so in a way that aligns the experience with recent avant-garde experiments by the likes of Harun Farocki, Ken Jacobs, Chantal Akerman, and James Benning. In Benning’s Ruhr (2009) and small roads (2011), for example, which likewise play with the viewer’s ability to perceive sly alterations in digital long takes, Benning generates a tension between the spatiotemporal truth of nature and our subjective experience of it. Kiarostami takes this strategy a step further. Does it matter that mechanically produced images, posing as documents, have been modified—imperceptibly in Benning, comically perceptible in Kiarostami—if, in the opinion of its maker, the modifications produce an experience that’s more “true” to “the emotions he felt when taking them?” While this question touches on broader theoretical inquiries into reality, perception, and time that the aforementioned artists are all consciously exploring to some degree or another, I suspect that Kiarostami couldn’t have cared less. According to his son, Ahmad, the impulse stemmed from his dissatisfaction with seeing a single shot. “I wonder what happens before and after,” his father would say.

There’s an endearing naïveté to that instinct that carries over into the film itself, which isn’t to say that it isn’t also deeply strange. Crafting what essentially amounts to the video-art analogue of Bob Ross’ Joy of Painting show, Kiarostami litters 24 Frames’ no-longer-still lifes with animals—crows, hounds, ducks, and bucks—which are liberally distributed across each canvas. A shiftless beast, eventually revealed to be a massive cow, wakes from her nap on the beach; a flock of sheep, seeking shelter from snowfall and timber wolves, huddles under a naked olive tree; and a pair of lions begin a mating session, only to be spooked and broken up by a booming thunderclap. There’s a quaint beauty there, but it’s also disconcertingly terrestrial—elementary and guileless, made all the more uncanny by knowing that every sign of life in the film is faked. Caught in a drive to reclaim lost moments from oblivion, there’s a sense that this is an awful lot of painstaking labour to pour into what ultimately amounts to simulated long takes of animals being animals. Given that these vignettes allegedly took Kiarostami a minimum of six weeks each to compose, there’s an aspect of 24 Frames that verges on madness, especially when accounting for the fact that it has ended up as more or less a structural film adaptation of “Old MacDonald Had a Farm.”

Yes, these used to be photographs, and yet now they move. The notion of an “event” becomes something to be taken for granted, because action—that is, movement, change, anything at all—is merely a matter of difference, a matter of what-is-now-being other than what was. One frame moving on to the next—an essence of cinema, which Kiarostami unquestionably understood. The solitary frame is dead, locked in place for eternity; but add another—even just one more—and all the space between them ignites, becomes caught in an infinite slide from A to B, now transfiguring and in-progress. And this is largely what the 24 Frames project is about: not the nature of the images or a cat pouncing on birds, but this frank acknowledgement that we’re only living when we’re becoming something else. Why else fill the proceedings with so much death? No less than three frames feature the sight of an animal getting shot dead—the animate becoming inanimate—while two others show one animal preying on another, one’s survival at the expense of another’s non-survival. Another shows what appears to be a pile of murdered seagulls on a beach, while yet another has its composition—a pile of logs in front of two tall trees—decomposed by a dispassionate chainsaw. Animals sleep until they wake up (or don’t), while that most life-unsustaining season of winter discolours nearly every scene.

Kiarostami’s frames, filled with computer-generated life and false time, manufacture an unnerving dialectic between the dead and the living—between stasis and energy—and the common reading will inevitably associate these themes to his imminent death. On the one hand, he worked on this project for over three years, having no clue of his fate; this isn’t Kiarostami’s Blackstar. On the other, how can we not, especially when the film’s final sequence features a woman asleep at her work desk, snow falling outside the window, while some piece of image-editing software processes a job on an open laptop: a video render, progressing frame by frame across the staggering final kiss of an old black-and-white film, which finally gives way to the words “The End.” As if we weren’t all dreading the 24th frame enough—it’s arrival methodically counted down, as though the Reaper needed to keep reminding us he was there—whoever pieced this thing together twists the knife with Katherine Jenkins’ rendition of “Love Never Dies,” the finale to Andrew Lloyd Webber’s The Phantom of the Opera sequel. But as with Resnais, to declare Kiarostami’s last work as his death film is to ignore that all of his films implicitly argued for life as a counter-argument to death, life as the decision to remain alive—a decision compelled by some desire, secular or not, to keep moving along. The progression from frame to frame, in this context, of course portends death. It’s also life and nothing but.

Posted in CS71, Festivals, From The Magazine, Spotlight