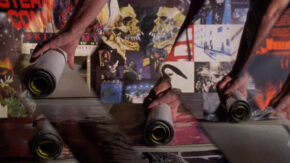 Best of the Decade: Jodie Mack

The rigorous and vibrant visual rhythms of Jodie Mack’s cinema were first impressed upon me in 2009, when I premiered a short film at the Ann Arbor Film Festival in a section titled “Feminist Travelogues.” I was fortunate to have been programmed alongside Jodie, who was screening a 28-minute stop-motion animation musical epic titled Yard Work Is Hard Work (2008). During the screening I sat completely dazzled as I watched an intimidating wall of meticulously cut images pulled from catalogues perform intricate designs, which, in combination with acrobatic camera movements and an original soundtrack, told an allegorical story of the disillusionment of married life. I was overcome by the film: I found that it was suffused with an aura of isolation and defeat; it was impressively impenetrable.