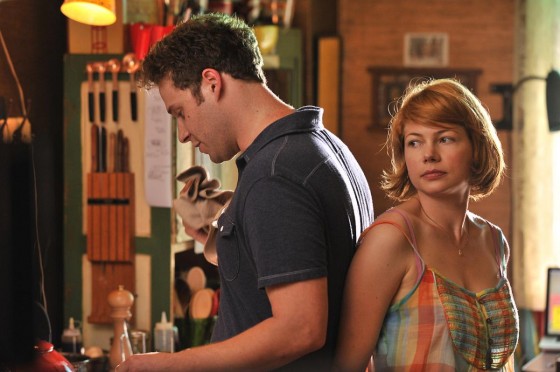 The first sign that Take This Waltz is going to be too writerly comes in the very first scene, when Toronto parks worker Margot (Michelle Williams) is coerced by a group of Nova Scotian historical re-enactors into pantomiming flogging an adulterer. As a self-contained scene, it’s pretty funny: the Canadian Heritage Site equivalent of being forced to shake hands with Goofy. As a cold open for a film that’s going to quickly become about the emotional anguish of a young married woman wavering between her homebody husband Lou (Seth Rogen) and local hardbody Daniel (Luke Kirby), it’s the rhetorical equivalent of a nudge in the ribs. Or maybe a lash on the back.

Even by Canadian cinema standards, Take This Waltz has a certain self-flagellating aspect. This comes through regardless of whether the viewer is aware of the correspondences—however superficial or circumstantial—between Sarah Polley’s first original feature script and the dissolution of her real-life marriage. The writer-director has mostly deflected this line of questioning, which is fair enough. It’s similarly fair for journalists to make and inquire about those connections. With this in mind, a colleague made the apt observation after a TIFF screening that Take This Waltz felt like a first draft. Not only because there are things in it that a good editor would take out—including, according to some critics, the entire third act—but also because the best parts have the headlong, unguarded quality of automatic writing.

Some viewers will be nauseated by Williams and Rogen’s cooing bedroom baby-talk exchanges, which run the gamut from cute to Cronenbergian (“I want to gouge your eyes out with a melon baller”).  But they’re plausible as signifiers of a desexualized intimacy—what happens when two people who love each other have absolutely nothing left to talk about. This idea of marriage as a cozy void is an affecting set-up for a romantic drama, and Rogen, whose technical abilities as an actor have improved considerably in the years since Knocked Up (2006), is convincing as a guy whose cuddliness may also be the path of least resistance, for him and his partner both. It’s too cute (in every way) that foodie Lou’s professional dream is a cookbook of recipes based entirely around chicken— a thick-as-a-drumstick metaphor for the monotony of monogamy. But Rogen’s performance isn’t monotonous. He keeps coming up with surprising line readings and sudden movements that betray a certain antsiness inside his stolid frame.

A measured, smartly physical performance is the sort of thing you’d more likely expect from Williams, but like Derek Cianfrance in Blue Valentine (2010), Polley nudges this gifted under-actor in a different direction. Margot, as they say, contains multitudes, and we’re supposed to register some combination of anxiety, heartbreak, resolve and angst in every lingering close-up. It’s a lot to ask of a performer, and the fact that Williams is equal to the task (as she was in Blue Valentine) doesn’t necessarily justify the demands. If Williams’ best performances in her films with the congenitally understated Kelly Reichardt were a case of less-is-more, Take This Waltz inverts the equation. Williams’ acting muscles get their briskest workouts in Margot’s scenes with Daniel: she has to look truly smitten, because otherwise, we’re unconvinced. But the fact that Daniel, who works as a rickshaw driver (is his job an Allan King reference in a film that also name checks Mon oncle Antoine [1971]?) and does tortured pencil portraits in his spare time, can sweet-talk Margot into a public orgasm strains whatever credibility has been built up.

It’s not that Kirby gives a bad performance so much as he has no chance of giving good one. In a film whose candy-coated visual scheme (courtesy of the reliably perfume-scented French-Canadian DP Luc Montpellier) has been generously read as a signifier of heightened urban reality, Mr. Rickshaw (his name is Daniel) feels like an especially stylized creation, the solid, sexy embodiment of everything Rogen’s softie is not. His incessant right-place/right-time appearances even have a ghostly quality, as if Margot were willing him into being: here he is at the coffee shop, there he is at the pool, now he’s moving in down the street. But about two-thirds of the way through the film, Polley suddenly decides to privilege Daniel’s point-of-view during a Parkdale party sequence, as we watch him watching Margot in her strained but sincere version of domestic happiness and resolving to manfully walk away. In this moment, Daniel ceases to function primarily as a projection of Margot’s desires and becomes a figure of audience identification, a spurned boy with a bruised inner life who it becomes okay to root for.

It’s an interesting gesture, but Polley doesn’t follow it all the way through. Once Margot breaks with Lou (in a tense, distended passage that teeters between being tortuous for both the characters and for the audience) and takes up with Daniel, Polley dives back into her distaff protagonist’s subjectivity and puts the emphasis exclusively on her individual experience of the new relationship. This leads to two major missteps. The first is formal: a long, self-consciously arty circular camera movement around Margot and Daniel’s pseudo-connubial bed inventorying their various sexual experimentations and their liberating effect on Margot’s consciousness. This much-discussed sequence is the film’s ace in the hole, and also its nadir. Suffice to say that for some, the superimposition of artfully choreographed hipster ménages à trois over Leonard Cohen’s title track will have a Ludovico-like effect (though Cohen’s croaking poetry of course survives the assault).

The second flaw is less conspicuous but even more problematic. By the end of this faux-Ophülsian passage we see that the shine has worn off and Margot feels just as trapped within a monogamous dynamic as she was before: commitment means making small talk with a toothbrush planted firmly in cheek. It’s finally clear that we’re watching a study of an inveterately restless soul rather than a real love triangle. So then why go to such painstaking lengths trying to make Daniel—or, for that matter, Lou—into three-dimensional characters? It may be that Polley is a determinedly conscientious filmmaker, trying to see things from multiple perspectives at once—a sort of emotional cubist (or maybe just a good Canadian). But even granting that, Take This Waltz is as locked-in and single-minded as its heroine, whose fate was sealed from the first crack of the whip. Past a certain point in this epically-scaled film, we know that each of Margot’s potentially safe havens—from Daniel’s sexy loft to Lou’s raggedy old house—is merely an oasis. There’s a word for this sort of deceptive, string-’em-along strategy: it’s called goldbricking.

This is not to say that Polley doesn’t also have a number of good ideas, some of which are extremely well-executed. If she makes a travesty out of a classic in her use of the title song, she also extracts something authentic and affecting from a piece of pop refuse: the Buggles’ anthemic “Video Killed The Radio Star,” smartly deployed here to emphasize its lyrical content (what’s lost when an old model is traded in for something shiny and new). The song comes on during Margot’s solitary mid-film idyll on Toronto Island, when she’s riding an ancient amusement park attraction known as the Scrambler; the combination of the location, the song and the low-rent strobe lighting create the sort of richly melancholy, end-of-adolescence effect Greg Mottola achieved in Adventureland (2009). Another impressive, self-contained scene finds Margot and her sister-in-law conversing  in the shower room at the local pool, with Polley’s camera starkly juxtaposing their comparatively nubile bodies with the more weathered forms of some older women. There’s an element of provocation here, but it’s also a smart visual correlative to Margot’s buried fear that her youth is slipping away; it’s a prod at the audience that also probes at the character.

These are moments of subtlety and moviemaking smarts in a film that’s too often chancy or confused. Having written herself into a corner near the end, Polley finally utilizes one of the worst of all dramatic conceits, the Holy Fool Who Speaks the Truth. That’d be Sarah Silverman as Lou’s alcoholic sister, whose spectacular fall off the wagon is bluntly juxtaposed with Margot’s self-destructive indecision (and literally turns what had been a patient, involving sequence into a car crash). Silverman’s distracting stunt-casting is the opposite of Rogen’s boldly out-of-character turn. Her big scene is indicative of a filmmaker and an actress reaching in tandem for a Big Effect and coming up all thumbs (or maybe it’s that their hands are just too heavy).

For all its shortcomings (to which we could also add some scrambled local geography—perhaps an homage to Atom Egoyan?), Take this Waltz does feel more urgent than Away From Her (2006). That nicely-made debut had the benefit of canonical source material and slam-dunk casting; it was a good film that also felt like a sure thing. Polley is putting more on the line here in every way. Whether or not Take This Waltz is personal in the way that some have suggested, it gives more of an impression of Polley as an artist than its predecessor. The picture that emerges is of a writer-director coming out swinging, which is transferred over to the characters—who are fighting for each other and against their own impulses—and also to the texture of the film itself, which is torn between naturalism and lyricism. And if Polley ultimately loses a split decision, that’s okay: ambitious filmmakers fail all the time, and from all appearances, she’s done it on her own terms. It’s nothing that she should beat herself up over.