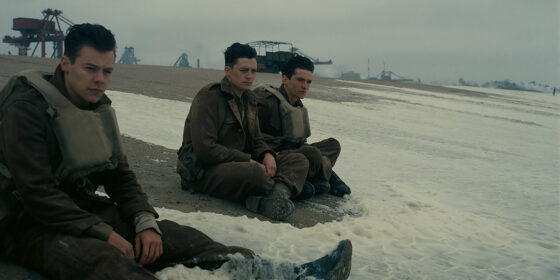 He just can’t help himself. Unless my memory is failing me, Memento-style, Christopher Nolan’s Dunkirk is the first World War II movie — and I suppose, provided we keep the designation relatively straightforward, the first war movie, period — that’s been deliberately crafted as a puzzle box. The relationship of form to content represents a question bigger than any single movie, even a $200 million opus designed for skyscraping IMAX screens, but Dunkirk’s canvas is so vast that it serves ably as a temporary staging ground for the debate. That Nolan and his collaborators, chief among them editor Lee Smith but also cinematographer Hoyte Van Hoytema and sound designer Richard King, have worked to create something intricate and unique is undeniable. What’s less certain, at least for me, is whether their structural intervention signifies much beyond its own complexity. The film is impressive, immense, immersive, yes — but is it anything else?

There are three strands in Dunkirk, and they’ve been wound around each other in concentric circles. At the centre is the loamy expanse on the French-Belgian border temporarily housing 400,000 encircled Allied soldiers — the remnants of the disastrous British incursion on the Continent against the advancing Nazi forces — awaiting transport back to England, its cliffs dimly visible across the sea. The middle ring plots the course of one of the hundreds of military requisition vessels deployed from the coastal hamlet of Ramsgate as part of Operation Dynamo, a daring rescue operation that brought civilian skippers into the line of fire. The outermost, and most literally elevated, trajectory is that of two RAF fighter planes deployed to provide cover for the other two contingents.

This tripartite alignment allows Nolan to play the same time-shifting games as in Memento, Interstellar and Inception — the latter of which offers the clearest precedent for what Nolan’s attempting here in its signature image of a van plummeting off a bridge, in serene slow motion and through several layers of narrative reality. The action on the beach, which gradually leaves the shore to follow a small group of soldiers unwilling to wait around for a ride while their ranks are decimated by German air raids, unfolds over the course of a week, while the section on the yacht encompasses a day and the aerial material an hour. As the film goes along, the parallel montage escalates, narrowing the gaps between these sharply delineated spirals into a Venn diagram, triangulating different levels of engagements within the geographic, historic, and conceptual space of “Dunkirk.”

Again, impressive — those critics who’ve ragged on Nolan and his editor Smith in the past for their ragged embroidery will have less to complain about than ever before. Because the 65mm frames are so gigantically scaled — and, in the beach segments, so awash in silty-gray negative space — the viewer is afforded a heightened awareness of graphic matches and colour grading between shots; these hold up in the moment, and probably upon repeat viewings as well. The cutting in Dunkirk is fantastically precise within each of its component sections, and then jarring when it’s first shifting between them, and then progressively less so the closer things get to the point of convergence. There is one cut, at the absolute peak of the film’s climax, that’s so beautifully conceived and executed that it seems to freeze time even as it describes a split-second manoeuvre. The degree of difficulty here — between faithfully depicting an event that comes pre-weighted with all kinds of associations and the attempt to radically defamiliarize it — is extreme; it finds Nolan making his own Spielberg move without ceding his own storytelling fetishes.

If it seems like I’m talking around the things that actually happen in the film — avoiding content for the sake of form — that’s because I’m truly uncertain about the upshot of Nolan’s filmmaking choices. The confidence with which Dunkirk has been made belies the confusion of its dramatic impulses, which are all over the place, albeit in the most disciplined, stiff-upper-lip manner imaginable. Nolan is an essentially Platonic filmmaker — he thinks in terms of absolute forms, and then fits his characters to their contours — and the talented actors asked to pantomime Cowardice, Heroism, Survival, and Witness (I think I just came up with a title for a New Order album) are forcibly subordinated to this grand design. So while it makes aesthetic sense that the young infantrymen whose experiences give the action its longest throughline are basically indistinguishable from one another (the most vivid is Fionn Whitehead’s furtive, resourceful Tommy), while the middle-aged pater sailing to their rescue has a craggy nobility (courtesy of Mark Rylance, the new, saintly face of Event-Movie Decency), and the pilot hovering above them (Tom Hardy) is a fully masked deus ex machina, the arrangement of figures doesn’t allow for much in the way of performance.

Which, it should be said, wouldn’t be as much of a problem if Nolan could commit to making Dunkirk an exercise in pure formalism: many of its most striking moments avoid individual characterization altogether. When the camera chooses a safe distance to take in the spectacle of thousands of uniformed men crouching in unison beneath a barrage of bombs, it’s a rare example of genuinely visceral abstraction; the image is suitable for framing even as it works up palpable, stomach-churning terror. (There’s also a possible embedded, inverted nod to Abel Gance’s J’accuse [1919]: when the bombs stop falling, the survivors rise while their less fortunate comrades remain face down in perfect formation.) The choreography of bodies and (especially) vehicles is astonishing, with an array of downed planes and overturned ships (glimpsed together in one fleeting panorama); even smaller-scale dramas of objects show real imagination, like bullet holes puncturing the hull of a scuttled boat and casting shafts of illumination through its darkened interior. The running motif of small, already claustrophobic spaces being transformed by external circumstance into death traps is so potent that it scarcely matters which members of the ensemble are being placed in peril; even for a director who’s made a point of depicting drowning over and over again in his previous films, a scene where a pilot’s cockpit starts filling up with seawater during an emergency landing represents a new peak of nightmarishness.

But again, this is form — and I’m not prepared to say that the division between Dunkirk’s outer shape and its inner meaning is either negligible or of no real consequence to appreciating its achievements. The slicing, propulsive sense that the film is moving towards something — driven by that incredible editing scheme and also Hans Zimmer’s metronomic musical score, which finds room for his usual bass-note rumbling amidst a whirl of tick-tock percussion — is perhaps its greatest strength, but the arrival point is underwhelming. Ideally, Dunkirk would illustrate how different experiences of wartime exist simultaneously in harmony and counterpoint, a cubist approach resulting in a kind of celluloid Guernica. In the final movement, though, things get flattened out by a summative, unambiguous British patriotism — the first such overt stirrings in the always Hollywood-oriented Nolan’s career — and the conventionality of the sentiment seems unworthy of the contraption it’s been attached to, or else recasts the contraption approach as its own kind of shell game.

There will surely be complaints levied against Dunkirk on other fronts: against the surreal spotlessness of its beachfront locale, very different from the carnivalesque hellscape in Joe Wright’s Atonement (2007); against the way its relentless pacing doesn’t allow its characters the moments of reflection that are inherently a part of both cinematic and lived experience (although Rylance’s wry smile at seeing a German plane get shot down is wonderfully observed); against its very status as the year’s biggest movie; and against Nolan’s  ivory-tower arrogance (currently being parroted and parodied by critics) regarding screening formats. For me, these are all secondary to the strange problem posed by a movie that is, in terms of what it sets out to do, completely of a piece but missing the surge of feeling that would make that thing worth doing. Reviewing Samuel Maoz’s gimmicky festival-circuit favourite Lebanon (2009) a few years ago in this space, Andrew Tracy asked what is to be done with “frictionless, impenetrable films whose narrowly defined perfection is their obscenity.” Dunkirk is superior to Lebanon, I think, and didn’t strike me as obscene — earnest and incredibly ambitious is more like it. But my mind went to the question anyway.