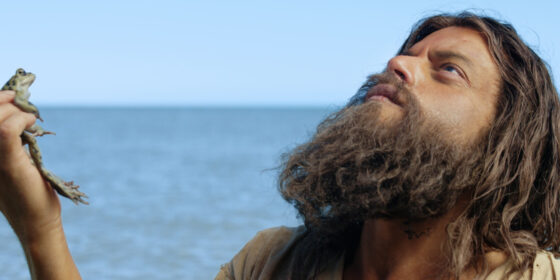 Rami Malek has become the new face of the Disturbed Man, a type owned in the past by Peter Lorre, Ray Milland, Anthony Perkins, Dustin Hoffman and Jake Gyllenhaal. That list suggests that the quality of our Disturbed Men has been somewhat declining. Malek may have reversed that trend purely with Mr. Robot, because as an actor he’s found a fresh set of notes to play. Those notes tend not to belong so much in a minor key, the cliché of disturbance, but in a calm, nearly pianissimo tone, half-major, half-minor. This is why Malek is unpredictable and mercurial.

Like Lorre, he was born to be disturbing. Surrounded by an innocent-enough face, his bulbous, orb-like eyes seem ready to explode at any moment. They’re so freakish (in a good way) they come dangerously close to distracting the viewer from everything else he’s doing. They’re even bigger in the widescreen images of writer-director Sarah Adina Smith’s overly worked, quasi-Lynchian Buster’s Mal Heart, in which Malek plays a man who suffers a schizophrenic breakdown.

At least, that’s how I read it. Others may disagree, and Smith’s twisty-topsy-turvy narrative and cutting (she did the editing as well) allow for various readings. It seems at first that Malek’s character is split three ways, between family man Jonah, married to Marty (the ubiquitous Kate Lyn Sheil) and raising a cute kid; Jonas, a Spanish-speaking castaway on a boat lost at sea; and Buster, a homeless “mountain man” in Montana breaking into people’s homes when they’re away for the winter. Smith aggressively intercuts between the three, sometimes with interesting visual connections, sometimes to pretentious effect.

This has the result of making the viewer work harder to draw the connections between the three men (actually one man, driven mad by late-night encounters with a conspiratorial paranoid played by the inimitable D.J. Squalls) than to get inside said mal heart. It’s left to Malek to bring the emotions, which he does with a greater range than he’s allowed on Mr. Robot. For all the technique on display (Josh Bissett’s sound and Mister Squinter’s electronic music rattles and screeches), this picture of a disturbed man is a lot like following a maze of bread crumbs that leads you back right where you started.