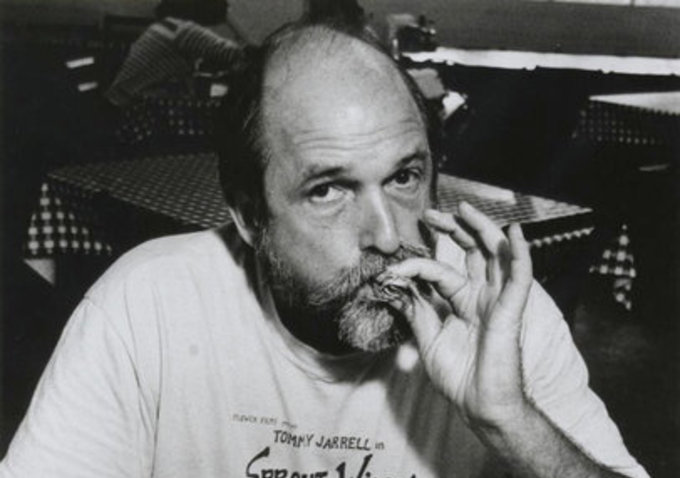 Much like the bastions of freedom and vernacular art he so lovingly recorded, Les Blank’s films seem a kind of arcadia on the horizon of documentary film. Blank died earlier this month at the age of 77, leaving behind a singularly festive body of work. Especially in the many small masterpieces shot in Louisiana (Spend It All, 1971; Dry Wood, 1973; Hot Pepper, 1973; Always for Pleasure, 1978), Texas (The Blues Accordin’ to Lightnin’ Hopkins, 1968; A Well Spent Life, 1971; Chulas Fronteras, 1976), and North Carolina (Sprout Wings and Fly, 1983), the infectious joie de vivre found in Blank’s films offers the best imaginable antidote to the ossifying tendencies of so much documentary portraiture.  No matter the subject, Blank’s films hazard to show it close to life.

Blank had been selected to receive this year’s Hot Docs’ Outstanding Achievement Award before his untimely passing. In the event, the three programs of his films at the festival should prove a fitting tribute. Concurrently, the San Francisco International Film Festival features a program of three recent Academy Film Archives restorations, including a gorgeous print of Spend It All. Often likened to Werner Herzog, whose Fitzcarraldo (1982) follies provided Blank with one of his best known but also least characteristic features (Burden of Dreams, 1982), the fine selection of his films playing at the two festivals makes a strong case for considering him alongside the heavyweights of American documentary. Frederick Wiseman makes for an especially intriguing point of comparison to Blank: both filmmakers developed a consistent enough approach in style and subject as to make their numerous works seem kaleidoscopic pieces of a single chronicle of American life (Blank’s would be a roiling picaresque); both formed their own distribution companies; both emerged from the verité generation with a seemingly inexhaustible interest in observing the individual in his or her social context. Their films present contrasting pictures of what constitutes that common society, however, with Wiseman preoccupied with the institutional structures that are anathema to Blank’s freewheeling portraits. Tempting as it is to read their respective works as polarized expressions of 1960s consciousness—structuralist critique on the one hand, a kind of utopic pastoral strain on the other—both filmmakers transcended these familiar frameworks by dint of genuine curiosity and an unstinting work ethic.

Musicians were of special interest to Blank as figures bridging communalist folkways with stark individualism. His immersive shooting style and preference for filming these subjects at home or else in a familiar space (dances, country stores, the side of the road—anything to avoid an actual stage) lends the performances an unmistakable tang of authenticity. At home in long takes, Blank liberally employs the zoom lens for close-ups of hands and faces. The deeply subjective pleasure in gesture and expression is already apparent in those rapt moments of Dizzy Gillespie (1964) during which Blank moves in to the trumpeter’s horn and blurs focus with a musical crescendo. Blank’s lyricism depended in large measure on his subjects’ spontaneity, however, which made Gillespie’s celebrity a problem. By contrast, the variety of Lightnin’ Hopkins’ impromptu performances in The Blues Accordin’ to Lightnin’ Hopkins affords a layered portrait far more nuanced than the usual mythologies of the bluesman as lone wolf.

Digression is a path towards wisdom in Blank’s work, both in the space of the shot and the open narration style. Mance Lipscomb’s explanation in A Well Spent Life that his greyhounds can fetch him five or six dollars worth of jackrabbits every day is a nice example of the kind of tangent Blank’s films gladly accommodate: not worth mentioning except for being there, which is exactly the point.  Meandering rivers and roads are consistent leitmotifs, and there is always time for a close-up of green onions and seasoned meat stirred into a pot over an open flame. Sprout Wings and Fly’s gentle portrait of North Carolina fiddler Tommy Jarrell includes a disquisition on moonshine whiskey and an extended sequence in which Jarrell’s sisters show Blank’s camera the many layers of tablecloths pasted over her mother’s picnic table. A Well Spent Life leaves Mance Lipscomb behind entirely for a climactic depiction of a river baptism. These are all scenes that might well furnish the film’s central subjects with material for song lyrics, giving the unmistakable impression of a deep accord existing between art and its environment, an insight most fully realized in melodic group portraits like Always for Pleasure, Spend It All, and Dry Wood—city symphonies set to the languid pace of Cajun country.

It was more than mere whimsy that led Blank to credit Porter Houston’s Bar-B-Q and “The People of Texas, 1967” along with Hopkins himself in the hand-painted opening titles for The Blues Accordin’ to Lightnin’ Hopkins. For one thing, the filmmaking credits are similarly generous (Blank often shared director credits with his editors and sound recorders). More to the point, the credits reflect something basic about the structure of the films, which, uniquely among such documentary portraits, do not discriminate between the marquee subject and more incidental walk-ons, but rather place them on the same plane of experience, the better to enter their world.

There’s a wonderful scene at the end of Sprout Wings and Fly in which one of Jarrell’s admirers asks him about Blank’s film crew. “They got some money from the government some way,” he reports. “I don’t know how they done it, and I ain’t asked them. It’s none of my business.” Blank clearly appreciated the irony of his drawing on government funds to film his pastoral lives (his work seems a late blooming of the WPA model in this respect). Similarly, he could offhandedly indicate the racial dynamics at work in his Southern settings without allowing it to frame the portrait (e.g., a wonderfully incongruous shot of white teenagers waterskiing past Hopkins and a friend fishing). A pastoral style invariably entails a certain degree of wishful projection, but Blank’s lyricism doesn’t dress his subjects up with manufactured dignity: rather, it works to expand upon the matter of fact. Blank’s slow lap dissolves are extraordinarily beautiful, more of a piece with 1930s documentary (or Bruce Baillie’s experimental films) than straight-laced verité. More specifically, there is the majestic purple sky stretching behind Lipscomb as he offers his shining account of love and religion; the dissolving images of a man canoeing that end Spend It All in grandeur and mystery; the slow final dissolve from Hopkins’ face tilted back in song to an exterior that racks focus from an idyllic field of flowers to barbed wire in the foreground (freedom and enclosure in the same image, just like the blues). These are but a few of examples of the beguiling ease with which Blank migrated between literal and abstract forms, simultaneously documenting and dreaming.

Many of Blank’s older subjects worry over the “fast living” that signals the demise of their traditions, though secondhand enthusiasts and avowed preservationists like Marc and Ann Savoy (the subjects of the 1991 Marc and Ann) would seem closer to onscreen vicars for Blank. Like him, they cherish the handmade, informal old-time ways; unlike him, they identify with a single culture. The films themselves act as a go-between, with Blank’s faithful attention to food and music reflecting an idealistic conviction in certain universals (as does his decision to distribute Kidlat Tahimik’s utterly simpatico Perfumed Nightmare). Every one of Blank’s films feels like a kind of homecoming, with the title of the Mance Lipscomb portrait illuminating the guiding question for all his work: What makes for a well spent life? Blank never tired of finding answers to that question, and the gusto with which he carried out the search is indeed an answer in itself.