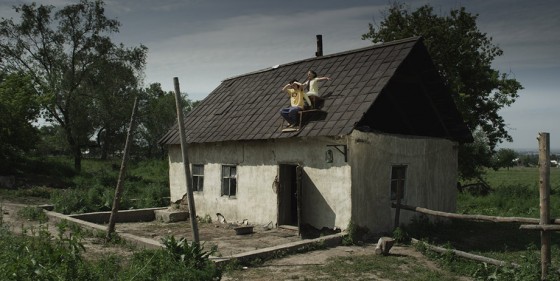 It’s difficult to evaluate a film as aggressively unusual as The Owners. Despite its grating quirks and featherweight jabs at social commentary, it cannot be summarily dismissed. This is the sort of film that is likely to garner not just defenders but a small coterie of genuine fans, folks who see director Adilkhan Yerzhanov as some sort of bizarre visionary. He’s certainly consistent in his preoccupations, as this is his fourth feature film to revolve around familial property rights. At its core, The Owners is a rather typical clash between interlopers from the city (in this case, the Kazakh capital of Almaty) entering a small village and facing systematic xenophobia. Three orphaned kids—eldest brother John (Aidyn Sakhaman), who has done time for petty crime; Yerbol (Yerbolat Yerzhan), the handsome, idealistic middle brother; and Aliya (Aliya Zainalova), the kid sister with an illness that remains unspecified until the final reel—come back to their late mother’s village to live in her old house, deed in hand. Only problem is, the police chief’s family has been squatting in the empty place, and these city kids’ claim means next to nothing in drunken, backwater Absurdistan. As The Owners progresses, Yerzhanov gleefully abandons any claims to realism, operating within an overdetermined, Kafkaesque register that I believe is supposed to read as black comedy. But tonally the film is all over the place, and as you find yourself noticing ideas cribbed from other filmmakers, the sheer incongruity with which they’re jammed together makes the experience something a little less than a game of Spot the Reference. Instead, it seems more like Yerzhanov is acting out of reflex, as if throwing Felliniesque peasant dancing and oily-faced grotesqueries next to a Kaurismäkian al fresco rhythm section, or a painterly play of light inside a ramshackle cottage straight out of the Pedro Costa playbook, is going to result in some rich stylistic mélange. (We even get a Hal Hartley coda.) None of it works, but it does show “work,” and lots of it. So like I say, The Owners will certainly impress a vocal minority. And in the end, that’s fine; Yerzhanov is hardly talentless and there’s nothing aggressively awful here worth getting fired up about. I’d just expect an artist to have a much more developed voice by Film #4.